Hello everyone. Been a while since the last post on here so apologies for that. Injury after injury has caused this. I'll be putting together a little write up of how this time off due to injury has gone and how I rehabilitated my finger shortly so keep a look out for that.

Aside from this, I am now getting back to normal strength and fitness slowly and steadily but nonetheless, things in my climbing are looking up. Here is a little video I have put together (very very quickly might I add) of some fun jump style problems at Rockover Climbing Centre. Sorry about the cheese (or am I).

Recently I was asked by The Climbing Station in Loughborough to route set for their annual summer festival. This involved setting for the final of the Sherpa Circuit Board Championships and also for the Charko and Evolv Boulder competition. As I have recently been getting more and more involved in route setting, it was great to be asked to set for an important event with a lot of responsibility to make sure the routes were right for the competition and they put on a spectacle at a busy event.
Friday saw me setting the circuits which I was doing solo. Six routes ranging from F6a+ to F8a+ designed to split all the categories competing on the Sunday. After a long day of setting and testing I was left with F6a+, F6c, F7a+. F7b, F7c+ and F8a+.
I was then back in early on the Saturday morning to set for the Charko and Evolv Boulder Competition but this time with Pete Whittaker. 40 problems to set ranging from VB to V8+. I have set with quite a lot of different people now but never with Pete so it was great to set with another new person and someone who has such a different style to mine.


The festival on the Sunday went really well and the circuit and boulder competitions both split everyone effectively, it was also great to see some of the younger climbers and first time competitors putting in great performances on the routes.
Posted by Unknown at 04:46 No comments:

So I have finally got round to writing a blog about my recent trip to the bouldering capital that is Fontainebleau. As you may have already seen, a friend and me have made a short video of some classic problems that we did on the trip (if not then you can watch it here https://www.youtube.com/watch?v=WyWY2HIzr3o). 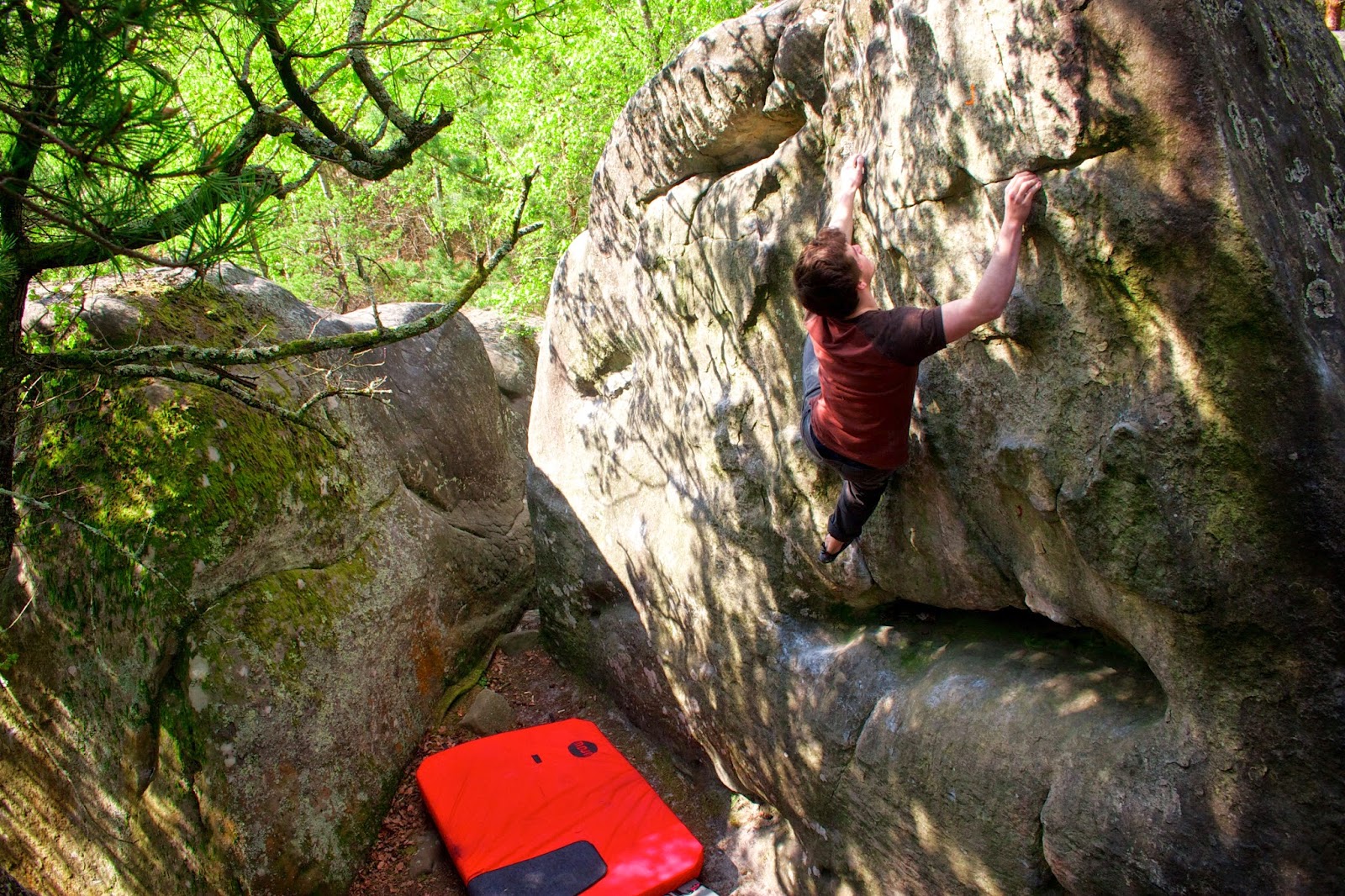 I went on the trip with very little expectations due a recent finger injury that has been niggling me for the last few months but it turned out to be a great trip for me, and the first time I have felt strong and not tweaky since the injury. Came back pretty psyched from my ticks and keen as ever to head back over as soon as possible.
After the standard longish car journey down with an amazingly lucky upgrade to an earlier ferry (made it with about two minutes to spare) we arrived earlier than expected. With this in mind we headed straight to Roche Aux Sabots for a quick evening session. Managed a few cheeky repeats including Jet Set F7a and a couple of other easy numbers before heading home for dinner. Good day all round really.
The first full day and we were off to 91.1 for the morning and Cul De Chien in the afternoon. After warming up on some spicy slabs I had Flipper Assis F7a+ in mind. After quickly working out the beta for it and dropping the last move twice, it was done. First tick of the trip. I then headed for a vertical problem called Les Pieds Nickeles F7a. This had one really tricky move at the bottom followed by easier climbing higher up. After being shut down on the first move and getting very frustrated, I worked out that I was aiming way too low for the second hold. With this in mind, I finished the problem straight away next go. At Cul De Chien, Arabesque F7b+ and Eclipse F7c were both on the to do list so I headed over to give them a blast. After pulling on the Arabesque and feeling far from good on it (I’d like to blame the temperature…) I moved onto Eclipse and was getting on much better with it. A problem that I am very keen to get back on when fitter and stronger.
Second day and we were at Apremont. Even though this was my fourth trip to Font, I was yet to visit this massive place. I had a few things that I wanted to try here being Crazy Horse F7b and Sitting Bull F7c. Before heading onto these two problems I jumped on a little problem called Centaure F7b. not expecting much, I pulled on and felt really good on it really close. Second go was just as good and I managed to send it on my third go. My quickest accent of a F7b to date. I then headed onto Sitting Bull F7c and was getting on pretty well with it. I was shown two ways of doing it and both felt quite doable. One way was very MORPHO (weird…) and the other was a very powerful way. After many attempts I decided to leave it for next time. Definitely on the cards for a send… I then headed to Crazy Horse F7b, which I did within the hour to finish off. Good day all round… 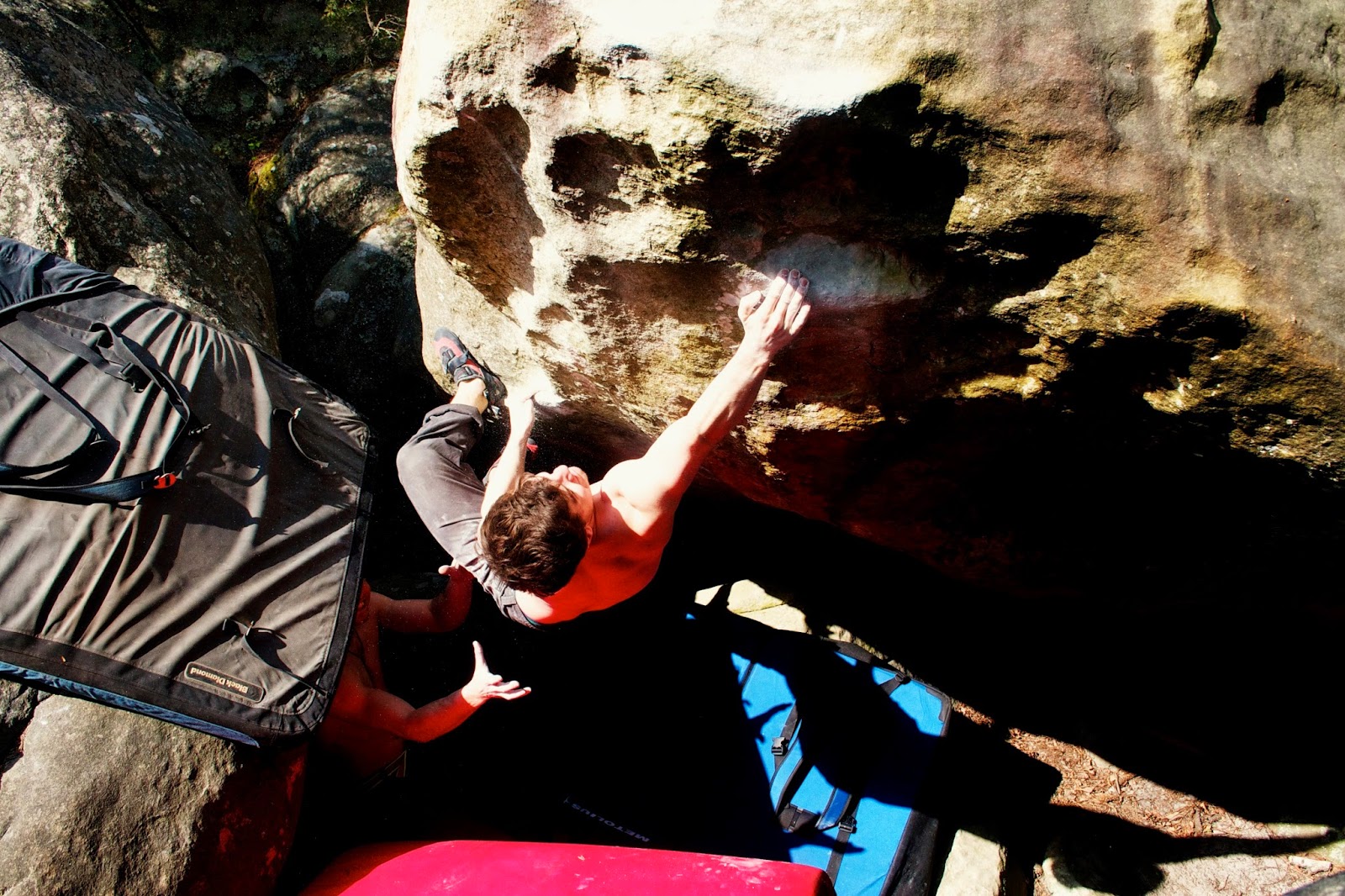 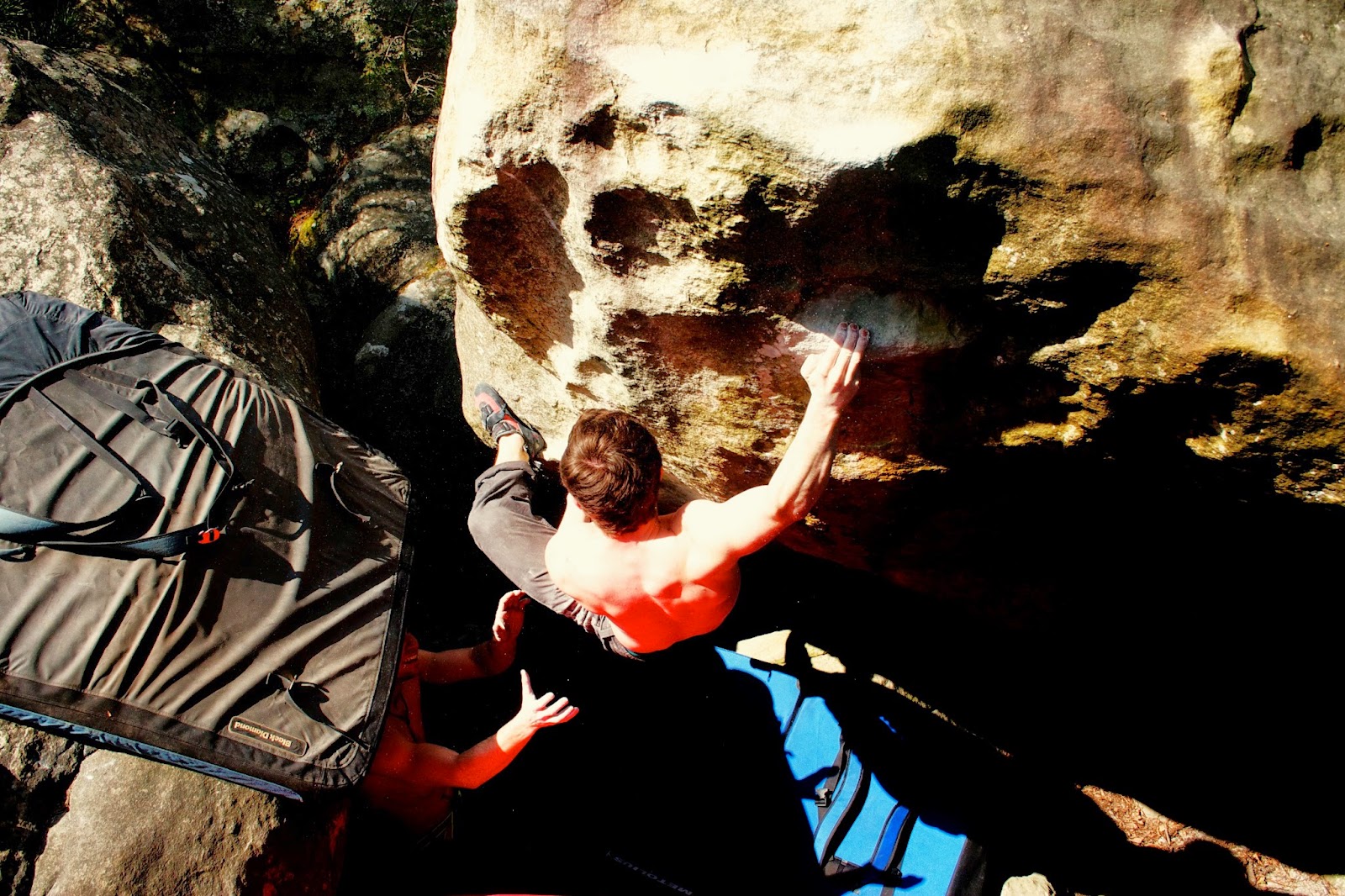 Third day was off to Petit Bois for the morning. This had a lot of easier climbing and a couple of big name classics. After warming up on some easier climbs, I had La Baleine F7a+, on the ticklist. I pulled on after watching some people on it first and came o close to the flash. I just dropped the final slap move. Pretty happy with this, I pulled on for a second go and managed to link it together. Happy with the morning, we headed off to L’elephant for the afternoon with one climb in mind. Splatch F7b/+. After trekking around a large proportion of the forest, we found the climb and it looked amazing. I was so inspired by the line. I pulled on and was being shut down by a move that absolutely no one else found hard. The big slap rightwards was easy for me but I couldn’t manage to squeeze my foot into the crucial toe hook. I was getting pretty frustrated with this but eventually I worked out some horrific beta that didn’t use the toe hook. Way more powerful, but it worked for me so no complaints. After having a heartbreaker attempt where I dropped the last move, I pulled back on and sent it the next go.
The next day was Bas Cuvier, which is home to one of my very long-term projects. Ever since my very first trip to Font, Carnage F7b+ has stood out for me but I have never got on well with it and have never come close to doing it. This time was very different. I felt really good on it and managed to top in about thirty minutes. Most memorable tick of the trip and maybe of all my Font moments. After destroying my tips trying the sit start version and coming painfully close to doing it I called it a day. I was to return bright and early the next morning to have one last go and linking the sit start but it wasn’t to be this trip.
Last day was my first time at Franchard Cuisinere. I only really had one thing on my ticklist for this day but nothing too hard, as it was the last day. Beetlejuice F7a+ was one of them, which took us an eternity to find due to someone’s van (*cough Duncan) not being able to go into the correct car park. A trek and a half later and we found the boulder. I came painstakingly close to the flash but dropped the final slap. Then after several falls on the middle section I linked it. Happy days. We then just wandered around the forest and found some other cool looking climbs. I ticked a thrutchy F7a and then found a classic F6c+. Both were really cool and were really nice to finish of the weeks climbing.


Thanks to everyone who made it a great trip. Had a smashing time. And thanks to Beyond Hope for there continued support… Like I did on my last trip to Fontainebleau, I will write a little post about the places I visited and what I thought they were like for the keen people out there. Keep an eye out for it on here…
Posted by Unknown at 06:46 No comments:

Little video I made of a trip to Fontainebleau last week. Hope you enjoy and thanks to Beyond Hope for the new kit for the trip…
Posted by Unknown at 14:34 No comments:


Quick video of a few cool eliminates me, Jon, Craig and Andy made up. Cheers boys…
Posted by Unknown at 15:05 No comments:

The last few weeks have seen me finishing off the Manchester Climbing Centres winter bouldering league and also take part in another amazing ROCfest at Rockover Climbing Centre. I was really happy with my performances in these and both have gotten me super psyched for the year ahead. As well as this I hit a slight setback in my training picking up a finger strain. Pretty gutting but I have been able to keep psyched on the bar sessions…
First up was the Manchester Climbing Centres (MCC) winter bouldering league. This consisted of three rounds with the cumulative score of the three ranking the final positions. The first two rounds were really good for me and I managed to finish high in the field going in to the final round in a comfy third place with the top three positions all being fairly tight. Then came the set back. A week before the final round of the winter league and two weeks before the ROCfest, my finger went. I was pretty gutted to say the least as I had been getting really psyched to resume my training after a break and push on in the comp scene. Still, it shouldn’t be too long off. The final round still went really well for me considering I was only able to open hand on crimps (My known weakest position) and I managed to finish only one point behind 2nd place and six behind 1st place. Overall I finished in 3rd.
Second was the return of the ROCfest at Rockover climbing centre. I have done this for the last two years now with this being my third appearance and every year it fails to disappoint. This year was no exception by fair. They pushed it bigger and better than ever before. Due to my finger strain I went into the comp with no expectations and I think this helped me climb better. I didn’t make finals but I was really happy with my result of 20th in a field of very strong climbers. The finals were absolutely amazing and I cannot wait to see what the guys at Rockover have got planned for next year…